Severing Relationships is a major sin! by Imam Dhahabi RA 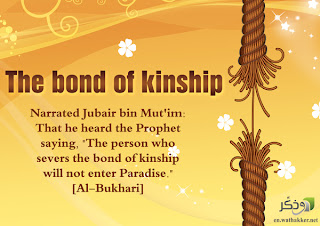 Severing the Ties of One's Relatives


Allah, the Most High, says in the Quran,


1.{Fear Allah, through Whom ye demand your mutual (rights) and be heedful of the wombs.} (An-Nisa:1)


2.{Then it is to be expected of you, if you were put in authority, that you will do mischief in the land, and break your ties of kith and kin: Such are the men whom Allah has cursed for He has made them deaf and blinded their sight.} (Muhammad: 22-23)


3.{Those who fulfill the covenant of Allah and fail not in their plighted word; those who join together those things which Allah hath commanded to be joined, hold their Lord in awe, and fear the terrible reckoning.} (Ar-Ra'd: 20-21)


4.{He causes many to stray, and many He leads into the right path,. But He causes not to stray, except those who forsake (the path), those who break Allah's covenant after it is ratified, and who sunder what Allah has ordered to be joined, and do mischief on earth: Those cause loss only to themselves.} (Al-Baqarah: 26-27)


1."He who severs his family ties will not enter Paradise.”Reported by Al-Bukhari and Muslim.


Thus, whoever abandons his relatives, is proud over them and disdains to support the needy if he is rich is included in this punishment unless he repents to Allah the Most Exalted and treats them well.


It was related that the Messenger of Allah (pbuh) said,


2."Whoever has poor relatives and does not treat them well and pays his charity to others and neglects them, Allah does not accept his charity and will not look to him on the Day of Judgment.” Reported by Al-Mundhiri.


"Wet your wombs (relationships) even by just greeting.”


lbn Hajar AI-Hathami mentioned it in Majma' Al-Zawa'id and said it is reported by Al-Bazzar.


"Whoever believes in Allah and the Last Day should maintain good relationship with his kin.”
Reported by AI-Bukhari.


6."Allah Almighty says, "I am the Merciful and it is the womb i.e. blood relation. I will hold by him who hold by it; and I will cut asunder from him who cuts asunder from it.”
Reported by At- Tirmidhi


Ali Ibn AI-Husain, may Allah be pleased with him, said to his son, "O son do not befriend he who severs the ties of his kin since I have found him cursed in Allah's Book three times."


Once, a wealthy man when traveling to the Sacred House in Mecca to perform Hajj (pilgrimage), deposited one hundred thousand Dinars to a trustworthy and righteous man until he returned from Arafat. Having stood on Arafat, he returned to Mecca to find that the man was dead. He asked the deceased's family for his money. But they knew nothing about the money. Accordingly, he explained the plight to the scholars of Mecca who then told him to approach the Zamzam well at midnight and then call upon the man.They said, "If he answered you the first time you called, he was among the people of Paradise." But the man went back to them after doing what they said with no response.


Thereupon, they said, "To Allah we belong and to Him is our return. The man might be of the people of Fire. Thus, you have to go to Yemen where there is a well-called Barhut. It is said that this well is at the mouth of the Hell, and call upon the man at midnight. Therein, if he is among the people of Fire he will answer you".


Having arrived in Yemen and approaching the well, he called upon the man and the man responded. He asked him about the wealth. He told him, "I had buried it in such and such a place. Thus, you could go there and dig to regain your wealth." Then, he asked him why he was in such a (horrible) place though people thought good of him? He said, "I had a poor sister whom I abandoned and did not treat her well. Thereby, Allah punished me because of her."


This is shown in the Prophet's saying,


"He who severs the ties of his family will not enter Paradise.” [Reported by Al-Bukhari and Muslim.]